When is this cheap magician, Sathya Sai Baba doing to die?

When I lived in Bangalore (in 1980) and studied for my MA in Mathematics at the world-famous Central College, my family (I included) drove in our Fiat car to attend a darshan of Sathya Sai Baba in his ashram at Whitefield, just outside Banagalore. A brilliant beautiful day, and we were not disappointed.

The Baba came out in a well-choreographed setting, from behind massive pink walls, very majestic, very 'inspirational'. It is clear that he is a talented actor. Nowhere in the league of Amitabh Bachchan, but one who could get a role in a modest, B grade movie. He walked in his huge orange robe (which has plenty of hiding places) distributing vibhuti to a few randomly selected devotees, some of whom had virtually sprawled at his feet.

Now, I had read the (then) recent exposes of his cheap magic tricks by P.C.Sorkar (whose brilliant magic skills I was fortunate to personally witness in Shillong in 2000), and, in addition, I had NO FAITH whatsoever that any man could possibly be God. So there was I, a bright young man standing upright, staring at him intently (if not insolently), trying to detect his cheap magic tricks.

To do him some justice, I did buy and read his book (I have since thrown that book away – or possibly it is lying somewhere among my books in India – so I don't recall its title), in which he claimed to be an avataar, and found too many deficiencies in it to bother wasting further time on this magician.

The only nice thing I recall of that visit – apart from gaining one more insight into the TOTAL LACK OF CRITICAL THINKING of most Indians – is that his Whitefield ashram sold excellent laddus. Now, that I did enjoy!

But a number of my close relatives were his fervent believers and I have always gotten into trouble with them (I got into quite serious trouble with one of them on account of this questioning attitude, long before I encountered Sai Baba personally).

To me the idea that anyone can claim to be an avataar is truly problematic. I have long held that should God ever visit us, "He" must be questioned extensively to ensure that we are not taken in by the claims of a fraudster. If God is truly God, he will have no objection to HEAVY DUTY testing. I personally have 100s of questions for Sai Baba, but of course he will NEVER let himself be publicly questioned.

But why am I writing on this topic? I am writing this in the interest of promoting critical thinking in India. Please don't agree/disagree with me. Ask questions. Find out for yourself. That's what I teach. I don't preach Vedas nor any scriptures. I preach YOUR SUPREMACY. I preach YOUR MIND'S SUPREMACY, your right to think and be satisfied in the n'th degree about everything you are asked to believe in (see my last blog post on a similar topic here).

Question: when will this magician die?

Now, I don't envy Sai Baba his huge empire, built upon fraud and deception over many decades. Most religions are built on fraud, anyway, and if we were to start challenging religions on that basis, there would be no religion left.

Human spirituality and emotionalism is very susceptible to fraudulent exploitation, and there will always be someone or other making a living off our foolishness. We have to take that as a given.

But there is this important topic of when he will die.

Sai Baba has made numerous claims, in the past, about the precise time of his death. He claims he controls when he dies, and can tell us decades ahead of his time of death. Now, that's a reasonably good starting point to prove you are God (why should God die is another matter).

But I checked and found that his claims are confused for he has obviously forgotten about this various claims made at different point in time (God must have a short memory). Check this out (also this). Either way, it appears he must die only between 92-96 years of age (of course, God can't  die, so "He" should presumably be able to live as long as he pleases – the idea of his dying doesn't make sense to me).

However, look at this medical bulletin issued a while ago, today, in India: 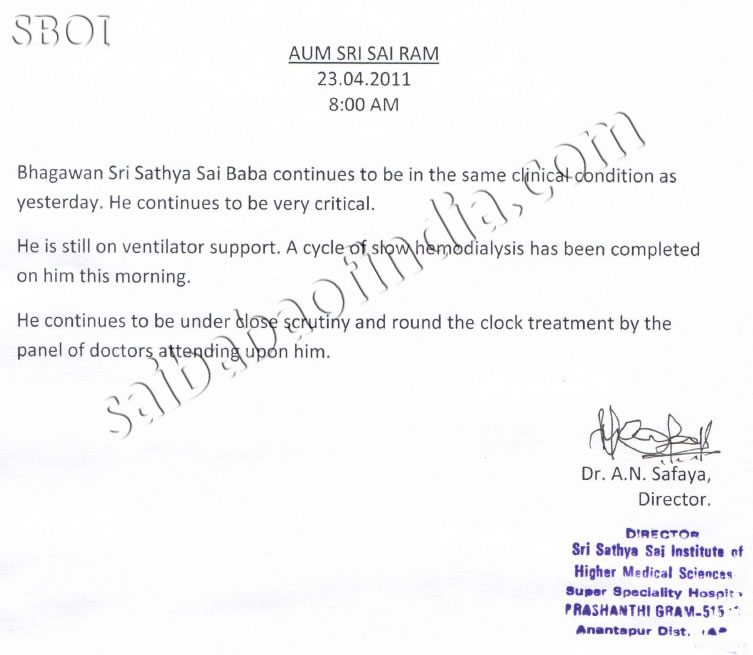 Questions now flow thick and relentlessly. Just two of them will suffice:

a) If Sai Baba does die before 92, what happens to all his claims of divinity? Will his devotees FINALLY feel betrayed and agree that they were following a cheap magician? (I can bet my last dollar that they won't! Some rationalisation or other will be conveniently found). [See addendum]

b) Why in heaven's name does Mr. Sai Baba need a doctor (or panel of doctors, round the clock)!!! Can he please explain! I am very confused. If I was God I'd not look for a useless physician who, in this current primitive stage of medical science, simply can't know much. As God I would, in any event, know far more about the human body than any mere, pitiable human. Or am I mistaken?! Is God ignorant as well?

Finally, to close this post, this was an interesting comment on a blog that set me off in spending a few minutes on this side issue:

Here’s a Sai Baba update, from the state revenue minister of Andhra Pradesh:

The condition of the Baba has deteriorated. Most of his organs have suffered severe damage and stopped functioning. Doctors attending on him are making attempts to save the Baba. Let us pray.

1) Within minutes of posting this, I received one of the most ferociously offensive and aggressive comments I've received in my life. I'm not publishing it but I will make note of all details including IP address should anything untoward happen. Clearly most people (particularly Indians) are simply unable to bear the idea of being questioned, leave alone appreciate that the purpose of education is to teach us to question.

2) Someone's just pointed me to a broadly similar post:

This entry was posted in Current Affairs, Philosophy, Religion and tagged in Critical thinking, magic tricks.

« If this is Hinduism then everyone should become Hindu
Why is our bureaucracy so inept? #2 »
View more posts from this author

25 thoughts on “When is this cheap magician, Sathya Sai Baba doing to die?”