A true hero lives amongst us: Bant Singh

I am a Panjabi – although I have lived there for just about four years since my father's job took him all over India. I have always been proud to be a Panjabi, believing that Panjabis are a particularly fearless people.

If you consider the paintings of fearless resistance against Mughal tyranny in the Golden Temple, or the fearlessness of Bhagat Singh, you'd agree with me. Indeed, India's history is replete with innumerable instances of Panjabi valour. No cowardice, no treachery mars the brave Panjab. Even in losing a great battle, Porus earned the highest respect of Alexander.

This brave culture is rooted in its ceaseless defence of India against invaders – for thousands of years. So long as Panjab lives, India will live.

But some Panjabis have brought great shame to Panjab

But today, an article about Bant Singh written by Amrit Dhillon in today's Age shattered this illusion. At least some Panjabi villagers have become TOTAL cowards, stooping to levels that bring great shame to Panjab and great shame to India. Not finding this article on the internet, I've scanned key portions of it, below.

Would anyone from Panjab please tell me what is causing this cowardice? First of all a rape. Then beating up Bant Singh. I've normally heard of this only happening in Bihar – which has a well-known medieval, feudal culture. But in the Panjab? The land of the great sikh Gurus?

Why, may I ask, have some people in Panjab stooped to such a great betrayal of the teachings of Nanak?

The most severe punishment should be accorded to these cowards, who attacked a 14 year old hapless girl, and then her father.

And let me salute Bant Singh for his unrelenting courage. A man who has shown what a man should be. He is a true Panjabi. I doff my turban (figuratively) to him. Bant Singh makes me proud to be a Panjabi, in the midst of all the shame that some other Panjabis have brought.

What "Dalit"?! He is a true Kshatriya. A warrior for the truth. Brave beyond compare. Please join this Facebook group that is doing a project about him .

A true leader is Bant Singh. I'd be proud to have him on board the Freedom Team of India. He has communist affiliations (just like Bhagat Singh had) but when he understands why freedom is the key to India's future, he will surely join the team. Could someone please contact him and urge him to join FTI? He is the kind of man we need.

Regardless, let's join hands (which he now can't) to applaud Bant Singh. 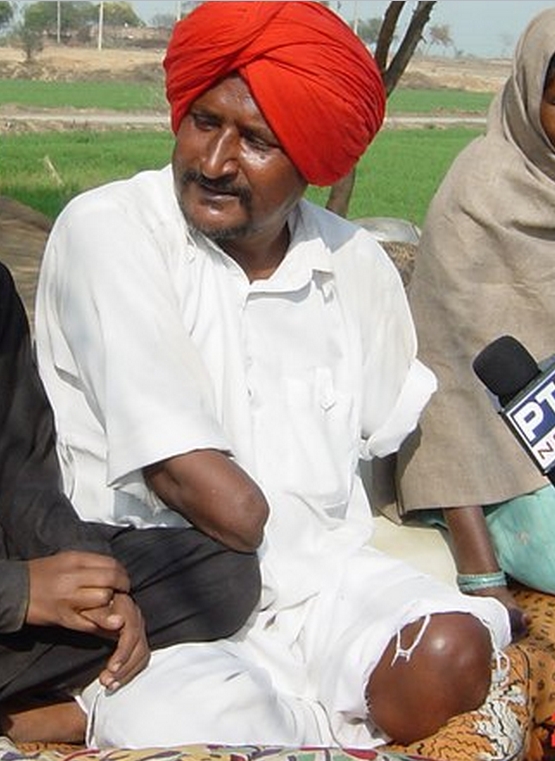 "Pained song of a Fighter" by Amrit Dhillon

WHEN folk singer Bant Singh is wheeled into a room or onto a stage to sing his revolutionary protest songs, the effect is always the same. The sight of this man in his orange turban, arms and one leg amputated, singing songs burning with the anguish of being born a Dalit — one of the castes once known as "untouchable" — is guaranteed to make smiles vanish and the audience shift uneasily.

When Singh, an agricultural labourer from Mansa in Punjab, India, performed at a recent literary festival in Jaipur, in the country's north, the crowd, previously happy, drinking, laughing and swaying to the music, was plunged into silence.

Singh's voice ripped through the carnival atmosphere, hoarse and powerful and commanding attention. Every song was a war cry, a call to battle against injustice.

The affluent and fashionable audience was transported to the reality of rural India, where Dalits can be mutilated for standing up for themselves.

"The lyrics made the hair on my arms stand up," said tour guide Parminder Gulati. "There was so much pain and anger in what he said. In one line, he said his daughter begged him to give her a pistol in her dowry so that she could protect herself against upper-caste men who think a Dalit girl is fair game."

Bant Singh's story begins with his daughter, one of his eight children. If he has become a hero of Dalit resistance against upper-caste oppression in Punjab, it is because he refused to be silent about the rape of then 14-year-old Baljeet by two rich landlords in 2000.

Dalits are meant to swallow indignities and injustices. But Singh, his outlook perhaps shaped by his involvement with the local communist party, refused to behave like a slave. He took his daughter's rapists to court, in defiance of threats and attempted bribery. "I refused to put a price on my daughter's honour. They offered me, in the end, huge sums of money, but I refused to back down," he said.

The assailants were given life sentences in 2002. But fearing that a Danes success in having upper castes thrown into jail could encourage others, the landlords took revenge.

Four years later, on January 5, 2006, a gang of seven men ambushed Singh as he returned home through the wheat fields in Mansa, smashing him with axes and iron rods. They left him for dead. … His wounds became infected. Gangrene set in. His lower arms and left leg had to be amputated.

Singh had sung folk songs at communist rallies before the attack. When he was told that he would lose his limbs, he replied: "I still have a tongue and I will continue to sing against oppression." … The staff and other patients were astonished to hear him, 18 days after the amputations, singing songs inveighing against the cruelty inflicted on Dalits.

His songs give hope that life can be different. "My message to people like me is to fight for their rights. My songs are all about shouting and protesting. I sing about people's right to dignity, their right to better clothes, to a toilet, to a home," says Singh.

"The attack on him was aimed at terrorising him and all other Dalit labourers, but instead they started coming to the rallies held in his support all over Punjab," said journalist Nirupama Dutt, who has recently completed a biography of Singh, The Ballad of Bant Singh.

Efforts are being made to popularise Singh's music and take it to a wider audience. He has been approached by Mumbai recording studios and there was the performance at the Jaipur Literary Festival. As well, a group of young musicians, DJs and filmmakers from Delhi and Mumbai are filming and recording Singh as part of Word, Sound and Power: The Bant Singh Project. The group have filmed Singh in his village and recorded him by laying his protest songs over electronic grooves and the beats of dance hall, dubstep and hip-hop to help his music transcend its regional and folk origins. They hope to have his music played in nightspots throughout urban India.

…As his story gains attention, life for Singh continues, as before, in abject poverty. His followers want the Punjab government to give him a personal attendant, but there has been no response yet. Singh's children, and his wife, Harbans Kaur, help feed and dress him and take him to the toilet. Depending on the donations he receives, prosthetic limbs may eventually be fitted.

His children appear to have inherited their father's passionate belief in social justice. Baljeet Kaur, now married and a mother, came under tremendous pressure at the time to accept bribes in return for dropping the case against her rapists. "If I'd compromised with them, I would have bought temporary peace, but I would have sold my father's faith and `izzat' [honour]," she says.

One thought on “A true hero lives amongst us: Bant Singh”