The Iceberg of Indian Corruption

The following diagram depicts the iceberg of Indian corruption. The diagram shows that a small portion of India’s corruption is ‘visible’ to us, the vast bulk being hidden from view; ‘below water’. 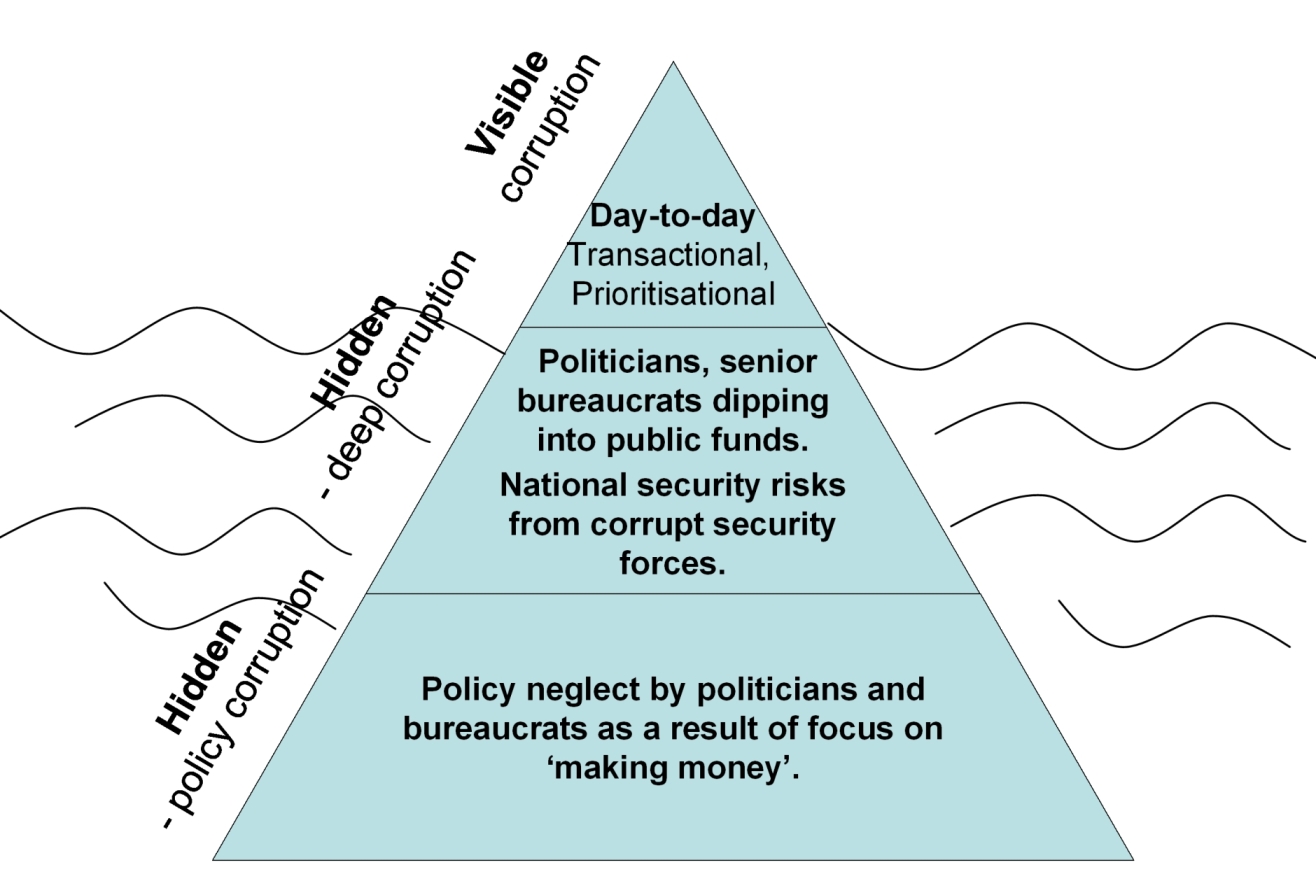 The diagram shows that corruption is of three types:
1) Visible Corruption
The visible tip of the iceberg is corruption experienced by ‘common’ people. It comprises many types such as transactional, prioritizational and avoidance.
As a result of some improvements in governance coupled with liberalization, most of us do not face visible corruption to the extent we used to. In any event, the bribe of a few rupees taken by a lowly government functionary – no matter how deplorable – is the least of our problems in India.
2) Hidden Deep Corruption
Below the visible corruption is an absolutely mammoth amount of possibly increasing, hidden corruption. This is where the bulk of the ‘money’ is made by politicians, in amounts that run into thousands of crores of rupees each year. The malaise of hidden corruption goes very deep into the vitals of India and provides evidence of its existence from time to time in frightening ways, as it festers for a long time and then erupts. We can’t easily ‘see’ it. But we know it exists when trains smash into each other, roads fall apart, millions of illegal migrants from Bangladesh swamp the country, police perpetrate major crimes and operate as organized criminals at night, and soldiers and farmers commit suicide. Corruption by ministers of police and defence has driven a deep knife into the heart of our security forces. Our border protection and possibly general security are in shambles. It is possible that India’s security could collapse one fine day like a termite-riddled house that has been chewed up, if deep corruption is not checked. We see this termite-like, hidden infestation at work in all government institutions such as public works departments, rural development programmes, public distribution system, education and health services. No major file, no appointment, no contract moves without such deep, fully institutionalized corruption.
3) Hidden Policy Corruption
But there is an even worse, more insidious and dangerous form of corruption not even thought about by most people. Policy corruption, or policy neglect on account of our political leaders devoting their entire waking energy to making money, saps the foundations of our country. Ministers of education spend most of their time in transfers and appointments of school teachers, for a fee. Other ministers consort with tenderers who bid for government contracts with a view to finding out who will pay them the most dakshina. That is the ‘regular’ deep corruption stuff. What happens with all this is that they are able to spend less than 20 per cent of their time on policy making and are forced to delegate policy and strategy to career bureaucrats. Not only are our bureaucrats blissfully ignorant of the world’s best practice in policy, their interests are often at cross-purposes with the interests of India. Many of them are focused primarily on wangling a stint in international organizations through their political contacts, when not making money on the side – which is the primary occupation of a large number of them now. Delegating policy to bureaucrats, namely our IAS officers, is a recipe for total disaster for India on a scale unimaginable by those who haven’t worked for decades within the government and don’t know all about what really happens! I have never seen more shoddy policy analysis than analysis which emerges from Indian government departments.
Ministers display a singular lack of excitement at the great opportunity they have to make a difference to the country. Our representatives simply do not care to question why things are not working and don’t care for finding out effective solutions. Policy-making is not why they joined politics in the first place; they joined politics only to make money. No minister I worked with ever asked any intelligent question on the strategic direction of his portfolio, or guided me on overall policy direction. I was on my own. And if, as a diligent officer, I did bring up such policy matters, there was bemusement when I explained various options through professional analysis. The damage done to India by chronic policy neglect by both ministers and bureaucrats, neglect which I call policy corruption, is far more devastating in impact than ‘regular’ corruption. This corruption leads to colossal damage – there are major policy errors such as investing our money in the wrong things, undertaking the wrong activities, not establishing systems to plan cities and infrastructure, non-functioning services and justice, non-existent schools, non-functioning law and order. No society can prosper, even if it has free markets, if its leaders are dishonest to the core and completely disinterested in good policy.
We therefore need to review our democratic system’s incentives to find out what it will take to attract some of our best people to politics. If we are to be only led by our most mediocre and corrupt people, then we had better get reconciled to perpetual mediocrity. The greatest barrier to entering politics is at the first gate itself – our electoral system. Tall barriers meet honest candidates who want to represent us, barriers deliberately designed to block out all good and competent people. The good news first – it is possible to remove these barriers, since they are all man-made. The bad news is that  existing politicians will never remove these barriers, for that would mean the end to their opportunity to make quick money!
[This is an extract from my book, Breaking Free of Nehru]
Please follow and like us:

This entry was posted in India, My publications, Public policy and tagged in Breaking Free of Nehru, Eliminating corruption.

5 thoughts on “The Iceberg of Indian Corruption”