NOTE: 13 March 2011. I first came across a link to this Wikipedia entry (see below) on Rahul Gandhi a few days ago on my Facebook page, and when I found time to re-read the Wikipedia entry yesterday it still existed, so I assumed that Wiki editors had checked it.

I did not therefore check the references in detail; particularly given my understanding that the de facto head of Congress controls such kinds of money. One cannot possibly check everything, particularly after having formed a general view over the years that Wikipedia is broadly as reliable as the Britannica.

Bhagwad Jal has investigated this in detail, however, and, upon making a determination, removed the entry from Wikipedia. I'm not sure if that was the wisest course to do, but so be it. This is a citizens' database and let Wiki and its editors work out how they deal with such entries. (Please read his comments below – as well as my comments after that.)

In this case I am clearly guilty of having been misled by a bad source (Wikipedia). I do hope Wikipedia will do a better job in the future, lest its credibility be shot to pieces, at least with me. At the minimum, I'm now going to have to check all references carefully before "believing" what is written on Wiki.

But I personally continue to believe that this claim of significant foreign assets is broadly correct and would like to lower this personal challenge from a precise figure (which was not really the substantive issue) to Rahul Gandhi's disclosing his (and his family's) black money assets clearly held in India and abroad.

That the Congress is a mafia organisation with deep connections to the underworld, rolling in black money, is my firm personal judgement. The current corruption scandals rocking India are merely the tip of the iceberg of corruption that is endemic within the Indian political system. It is simply not possible to enter 'real politics' in India without such significant control over black money. So let Rahul Gandhi prove he doesn't control HUGE amounts of black money.

And so I've now removed the figure of $14 billion from the title of this blog post but continue the personal challenge, as before. I'm SICK AND TIRED of  the corrupt leaders of India. Let them be challenged and interrogated.

Under no circumstance can Rahul Gandhi (and his family) escape accountability just because a particular figure cited was erroneous. Let him publish the detailed accounts of electoral expenditure by the Congress party, prove that he has no foreign accounts, prove that he does not control black money. That is impossible. He is fully involved. The size of his involvement is irrelevant. Whether $2.5 million (too low) or $10 billion (more plausible) is irrelevant. 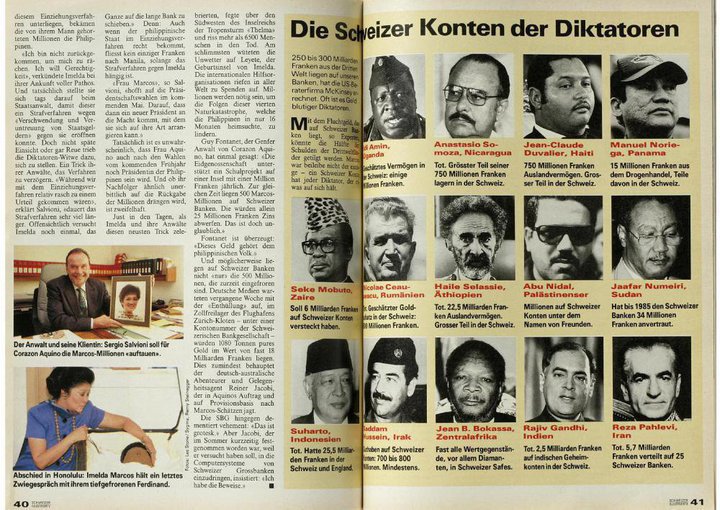 ARCHIVE – THIS IS WHAT I PUBLISHED YESTERDAY. JUST FOR THE RECORD.

Nothing that is inaccurate lasts for very long on Wikipedia. Its aggressive editors expunge it out at once. However, they clearly believe that sufficient evidence exists to suggest that Rahul Gandhi's hidden wealth is in the range of $14 billion ($9.41 to 18.66 billion).

To me the figure is highly believable, given my DEEP AND PERSONAL understanding of how the Congress party works. It is also not a ridiculous figure of the sort that some people have earlier floated around in the India media.

At the minimum I challenge him – IF HE HAS THE GUTS – to sue Wikipedia for the devastating damage it is doing to his reputation across the world.

He can pay off The Times of India (which called him an honest man!), but not Wikipedia.

To be doubly sure that Rahul Gandhi doesn't actually pay off even Wikipedia to erase this entry, I've copied this image today, 12 March 2011 for the public record. (Image below)

This entry in Wikipedia also explains, given the huge power of the blogsphere in spreading such BASIC truths, why Rahul Gandhi is likely to be personally behind the proposed Indian law to control Indian bloggers. Shame, Sonia and Rahul (and EVERYONE who has supported them, including MMS, and India's IT billionnaires).

When will India start believing the truth? When will we throw out these corrupt socialists? Please join or support the Freedom Team of India if you want India to not only do 10 times better economically, but to become an exemplar of ethical goverance. 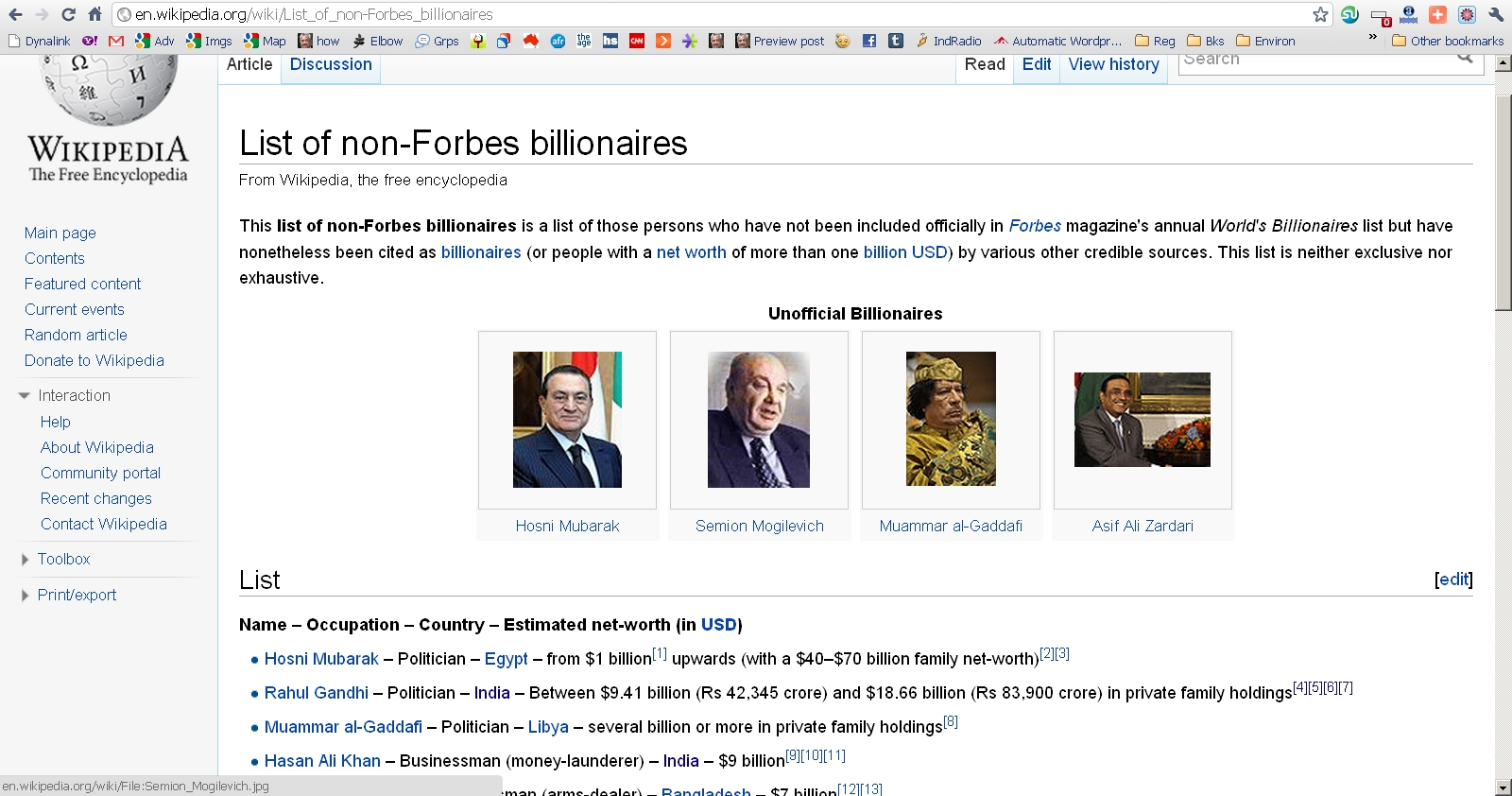 Just to check where I'd seen this Wiki entry first, I searched my FB page and found that I'd seen it first on 9 March 2011 (Thursday). See image below (click for larger size). It was therefore posted at least on 9 March (if not earlier) and Wiki editors had sufficient time to check the credibility of the sources. The Wiki entry states clearly that these people have been cited as billionaires by "various other [non-Forbes] credible sources". 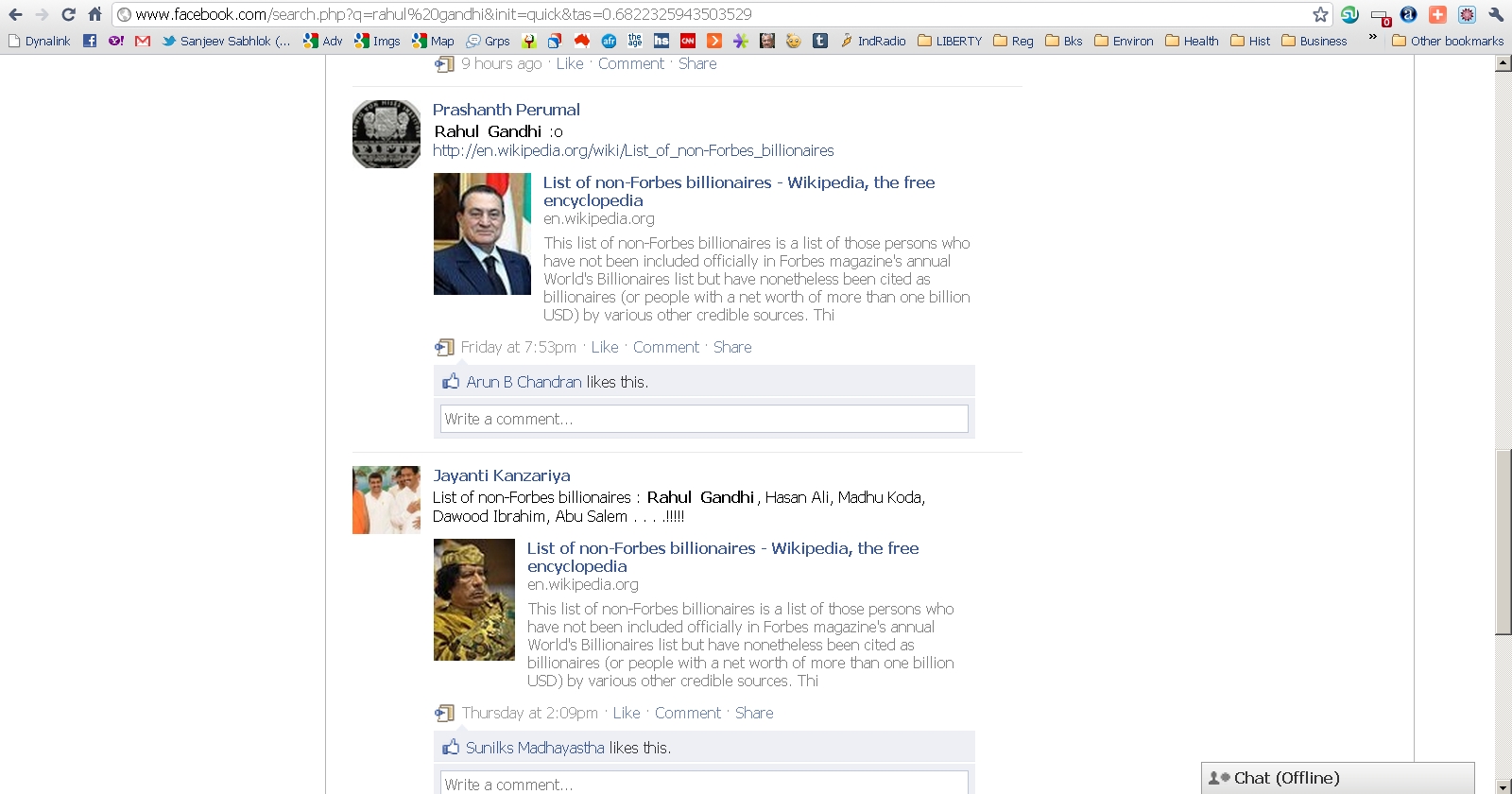 This entry was posted in India, People, Politics and tagged in Corruption in Indian politics, Rahul Gandhi.