For too long have we been getting mindless panic in the public space driven by shonky “climate” research. The flimsiest piece of evidence is offered as proof that the sky is falling down but all evidence relating to the benefits of CO2 is ignored.

That is unacceptable. Apart from the group think involved here, we need to ask: is anything in the world only one sided? In particular, how can a thing like CO2 on which the ENTIRE PLANT KINGDOM survives – and which is key fertiliser for our food (without CO2 we’d instantly die), ONLY impose costs?

So if it does have benefits (and this entire book is devoted to a discussion of such benefits. 55 benefits have been identified), then we need a more fine tuned, common sense discussion – see the following decision tree: 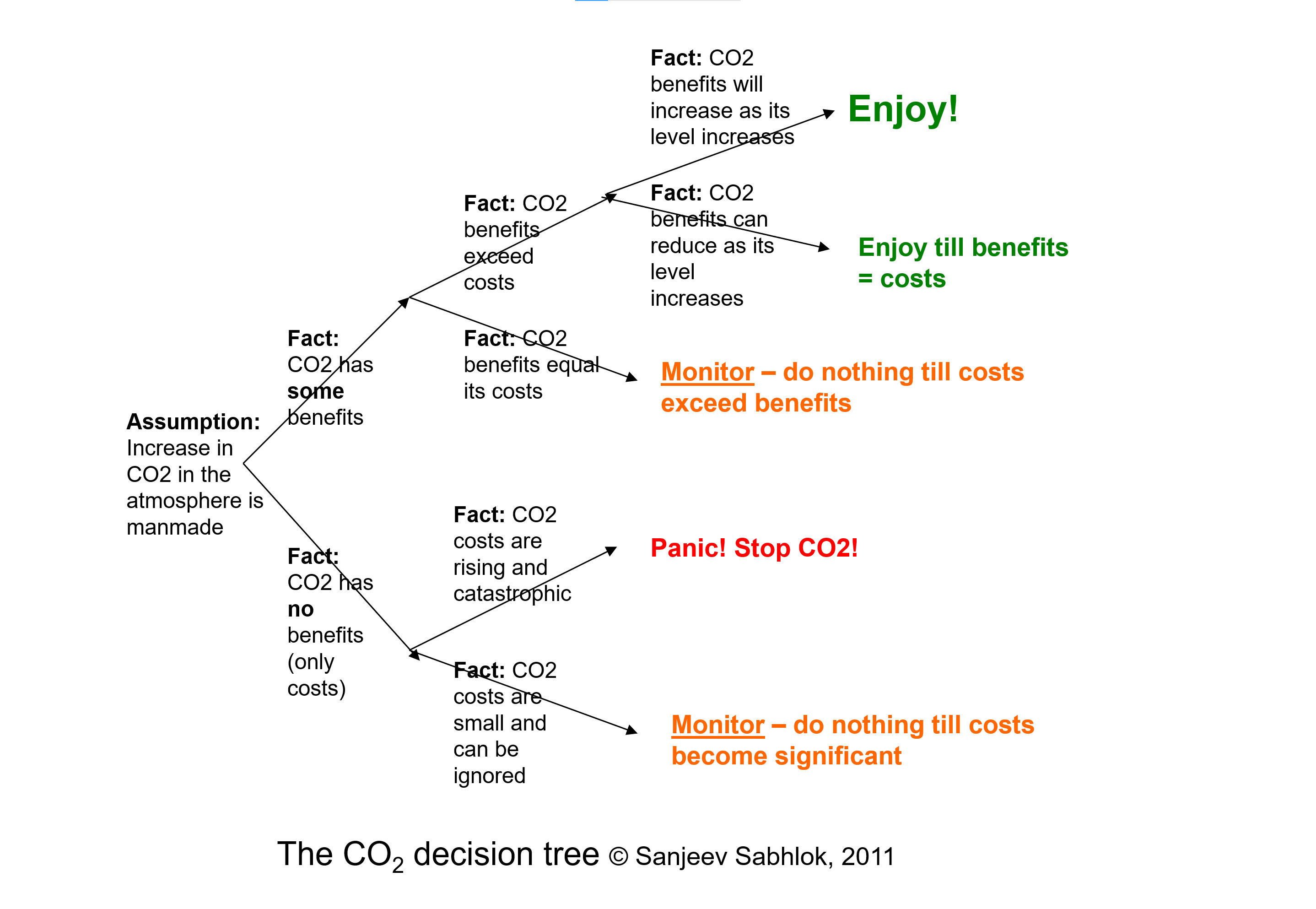 It is becoming more and more clear to me that the mania about CO2 as a “pollutant” has gone on for too long. The reality is this:

a) The world is coming out of a little ice age [see this] which means it has been continuously warming for about 150 years. That warming can reduce in the future as sunspot activity reduces (the sun is showing signs of a slight downturn: the effects of that will be evident over the next decade given the lagged effects involved).

b) CO2 is a greenhouse gas with logarithmic effects. In other words, after a very small level, its impact decreases dramatically. The doubling of CO2 from, say 1960 levels, will only very marginally increase global temperature, and further doubling will increase it by an even smaller amount.

c) And so, MOST of the increase in temperature in the last 50 years has NOT been because of CO2 but because of natural factors that are driving the Earth’s recovery from the mini Ice Age.

d) CO2 is plant food, and its greater presence in the atmosphere (still a tiny part of the total atmosphere) has helped plants which were famished because by 1960 the world had reached the LOWEST level of CO2 in the atmosphere, ever. CO2 levels have been declining for millions of years, and we now had reached the lowest levels, ever. Most CO2 is converted into fish bones and sinks to the bottom of the sea.

So far as we can tell, CO2 benefits FAR EXCEED costs. There is not the slightest reason to panic.

Also, “For most of the past 17 years, global warming has been occurring at a rate that is below the average climate model expected warming” (source). Clearly the underlying science is weak. Moreover the benefits of modest warming (and increased CO2) have been completely ignored. Such shoddy thinking is not good enough! I look forward to a truly sensible report on this issue from serious researchers, not those with an axe to grind.