For 12 out of the past 20 centuries, India was the world’s RICHEST “country”

[Note: I wrote a longish post but with an accidental stroke, without saving it on WordPress, lost it! I’m not going to re-type it. (It is horribly frustrating, for a person with RSI and eye strain, like me, to lose my typed work!)]

Basically, all I want to note that in 12 out of the past 20 centuries, India was the RICHEST region in the world (there were no “countries” then). In the remaining 8 centuries, it was the world’s 2nd richest region. Only in the 19th and 20th centuries – and now – has India not been in the top two nations in the world.

a) Economic history of India

The rules of the game changed between 1400 and 1750. Just like big companies that do not change with the times, die, India almost entirely lost its capacity to innovate by around 1750. Others, earlier far behind, rushed ahead. Every Tom Dick and Harry, including Japan, South Korea, Hong Kong, Singapore, Taiwan went ahead.

India continued to lives in its dreamworld, as confused as Islamic cultures are about their precipitous downfall. Tragically, till today, most Indians REFUSE to recognise that the rules have changed long ago. The competition is no longer the same. It is 10 times tougher.

India can NEVER become  No.1 in the world again till Indians realise that they have to play with the new rules.

That means, among other things, discarding caste, stopping the constant religious babble that destroys peace and harms relationships, and the economy. That means building systems that are incentive-compatible.

That India should be doing AT LEAST TEN  TIMES better than today is obvious. But achieving that requires a significant change in policies and governance – which have to be radically different to what we have had over the past 60 years.

Unfortunately, none of the existing political parties in India have the remotest clue how to get this to happen.

And so, once again, if you are serious about a very prosperous and successful India, read BFN; join FTI. There is NO other policy known to mankind that can help India achieve its potential; or rather, its natural right.

Why did India not accelerate?

India has lagged badly since about 1750, as the following graph shows: 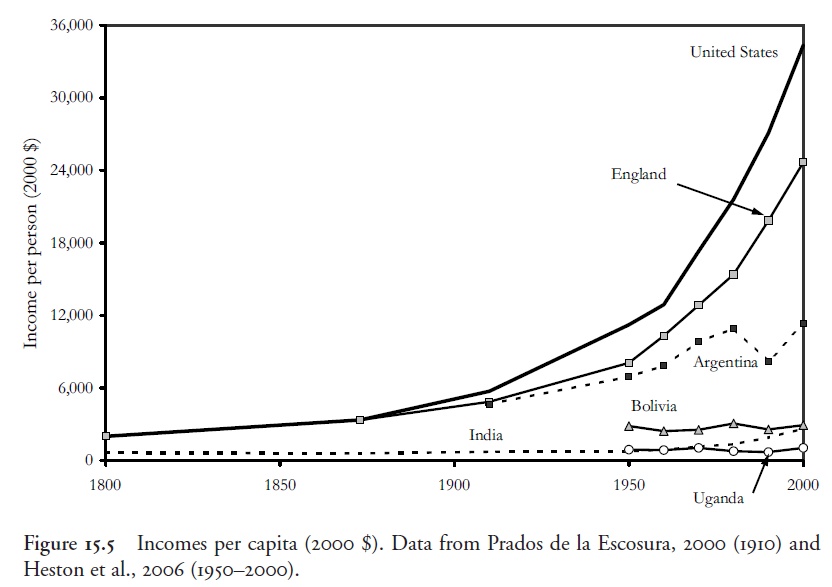 [Source: Gregory Clark, A Farewell to Alms: a brief economic history of the world, p.321

“the acceleration of advances in productivity came from the supply side. People responded differently to incentives that had been in place for generations. That difference in response was a dynamic inherent in the institutionally stable private property regime of preindustrial England. The characteristics of the population were changing through Darwinian selection. England found itself in the vanguard because of its long, peaceful history stretching back to at least 1200 and probably long before. Middle-class culture spread throughout the society through biological mechanisms.” [Source: Gregory Clark, A Farewell to Alms: a brief economic history of the world, p.259.]

“Japan, China, and India, lagged behind it in establishing bourgeois society through all ranks of the population.” [Source: Gregory Clark, A Farewell to Alms: a brief economic history of the world, p.266.]
The Brilliant Indians

This entry was posted in Economics, Freedom Team, India and tagged in History, Poverty in India.