Wikileaks will not make the world a better or safer place

I get to read The Economist a bit late, about 3-4 weeks after its date of publication, so you'll notice that my comments on some of its articles are delayed. This editorial on Wikileaks (4 December 2010 issue) caught my attention today. It shows why Wikileaks is not a good idea (in its current reckless form and shape). I'm gratified that the The Economist made similar observations to mine. [See my blog posts here, here, and here.]

Before reproducing the Economist article below – for it is really worth reading – let me re-iterate the fine line involved in relation to Wikileaks: I'm all for whistleblowing. Therefore, so long as Wikileaks sticks to disclosure of crime, corruption or such things, I'm all for it.

But going beyond that is inappropriate – for then it impinges adversely on the world's security against the enemies of freedom. 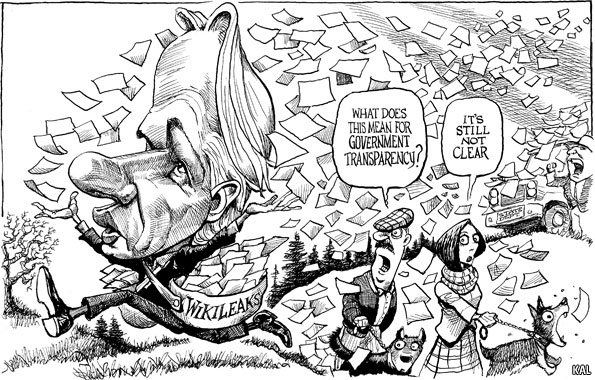 You don’t have to be Julian Assange, the man behind WikiLeaks, to think that governments have a nasty habit of abusing their powers of secrecy. Or that, whether governments are corrupt and malign or merely negligent and incompetent, then sunlight is often the best disinfectant. One of the jobs of journalism is to make a grubby nuisance of itself by ferreting out the establishment’s half-truths and embarrassments. And one of the jobs of the courts is to police the press by protecting whistle-blowers while also punishing libel and treachery.

But the most recent WikiLeaks dump of diplomatic cables has overturned that order in two ways. First by its sheer volume. When you have not just a handful of documents to release, but more than 250,000 e-mails seemingly touching on every file in the State Department, however dusty, you discredit not just one government official or one policy, but an entire way of going about diplomacy.

It is too soon to know what effect the leak’s revelations will have. The newspapers have so far published the e-mails piecemeal, and a lot more are to come. Foreign-policy experts are right when say they have learned little that is radically new. Revelations about the tireless nightlife of Italy’s ageing prime minister will surprise no one. Given that hundreds of thousands of people had access to the cables, the sensitive stuff will already be in the hands of many a spy service.

But the experts also miss a larger point: they themselves are part of the elite inner-circle that WikiLeaks wants to break open so that Everyman can judge for himself. Perhaps shattering all those taboos might do some good. The public airing of Arab leaders’ fears of an Iranian bomb might shake others’ complacency about the issue.

But any gains will come at a high cost. In a world of WikiLeaks, diplomacy would no longer be possible. The secrecy that WikiLeaks despises is vital to all organisations, including government—and especially in the realm of international relations. Those who pass information to American diplomats, out of self-interest, conviction or goodwill, will be less open now. Some of them, like the Iranian businessman fingered as a friend of America, could face reprisals.

In the past, the rights and wrongs of all this could have been determined by public debate, the passage of some legislation and the courts. Not any longer. The second way in which WikiLeaks has overturned the old order is by being beyond any jurisdiction. America can and will try to use its laws to protect its secrets. But even if it locks up Bradley Manning, the 23-year-old serviceman thought to be behind the leaks, and even if it captures Mr Assange, the information is out, on a network of computers somewhere in cyberspace.

Back to Chinese whispers

In any case, there will be other Mannings and other Assanges. You cannot uninvent the technology for copying a State Department’s worth of cables and carting them pretty much anywhere. The only remedy is to manage secrets better. The damage that America’s diplomatic service has suffered is partly the result of sloppy practices. It has now tightened access to the e-mails and the scope to copy them. Sensitive information will have to receive a higher classification.

On reading diplomats’ dissembling, people may be tempted to sneer. In fact diplomacy’s never-ending private conversation ultimately helps see off war and strife. That conversation will continue. Too many people have too much to gain for it to stop. But it will be less rich, less clear and therefore probably less useful. WikiLeaks claims to want to make the world a better place. It will probably do the reverse.

ALSO FROM THE SAME ISSUE OF THE ECONOMIST:

It would be an exaggeration to say that diplomacy will never be the same again. Self-interest means that countries will still send and receive private messages. Butcommunication will be more difficult. The trading of opinions, insights and favours necessarily requires shadow, not light. Unofficial contacts such as businessmen, journalists, campaigners and other citizens who talk to American diplomats, out of goodwill or self-interest, will think twice about doing so. Being tarred as an American crony can be lethal.

This entry was posted in Bad ideas!, Current Affairs, Liberty and tagged in Freedom of Expression, Wikileaks.