Why Amartya Sen is not a classical liberal

I'm often asked by people (both Indians and Australians) what I think about Amartya Sen. I tell them that at least some of his ideas are dangerous!

But there is nothing to be surprised if you know what I stand for and what Sen stands for. I stand for FREEDOM. Sen stands for ECONOMIC EQUALITY. That is the difference, in a nutshell. Sen talks and writes about freedom but he is essentially all about economic equality.

I do admire his work in theoretical welfare economics out of sheer curiosity – noting that welfare economics is (almost) totally irrelevant to policy making. Also, as an Indian I'm parochially pleased that a fellow Indian was given a Nobel prize (although in my view, Jagdish Bhagwati is more deserving). But my fundamental philosophical difference with Sen doesn't allow this happy parochialism to be sustained for long.

In my draft manuscript, DOF, I've picked apart John Rawls's inconsistent, untenable arguments. Sen is inconsistent, as well. For instance, he writes about freedom on the one hand but advocates land reforms (i.e. redistribution) on the other, rejecting property rights. But such a view is impossible to sustain! There can't be freedom without assured property rights.

The classical liberal is comfortable with a social insurance scheme (not redistribution!) whereby we ensure a modicum of equal opportunity for all including a social minimum (through a negative income tax), emergency health care for all, and education of all children to age 18. But this standard classical liberal approach doesn't satisfy Sen. He wants to go well beyond this, to establish, for instance, an "entitlement over an adequate amount of food" (But I believe that while the social insurance program can top-up the income of those below the poverty line, that's where the role of the state comes to an end. If someone chooses thereafter not to eat food but to burn that money, that's his choice. We can't put food inside people's mouths. And the concept of responsibility is crucial to this equation).

Similarly, Sen is keen to reduce "inequality" between urban and rural areas. However, I believe that living in urban/rural areas is a personal choice: each has its advantages and disadvantages, and it is none of the business of the state to equalise anything, anyway. Let there be choice, and let the state not forcibly move people around as if they were pawns on a chessboard.

Equality (and its consequent planning) fascinates Sen at each step – and takes him astray. His is therefore NOT a freedom-based agenda, but a statist and interventionist one.
His many policy failures are mainly underpinned by his underestimation of government failure (about which he is well advised to listen to brilliant Indian economists like Deepak Lal or Jagdish Bhagwati – if he doesn't care for my advice despite my extensive experience of governance failures gained by working inside bureaucracies). He wants India to have more, not less government. Further, he wants governments to get involved in social problems such as "social exclusion" and "gender inequality". In my view these are NOT things for governments to get involved. The state can do its job best by being blind to all distinctions amongst citizens. Let social reformers lead on social matters. We ought to be wary of empowering IAS officers (who may hold a range of whimsical views) to "resolve" our social problems – by throwing good money down the drain.

Sen's positive liberty agenda will ruin India – just as Nehruvian socialism destroyed India. The only good thing about Sen is that his is a more pro-market policy position than Nehru's was. But that's exactly where our agreements come to an end. He fails to understand that we CAN'T have the cake and eat it too. We can't have freedom and economic equality too. Nyet.

More importantly, ANY unjustified contamination of liberty with paternalism (since when is the liberal state our keeper?) will destroy wealth, impoverishing the entire nation. This is not how Adam Smith suggested that nations become rich. Sen would do well to read Adam Smith.

I don't have to say all this, actually. Sen knows well enough that he is not a classical liberal but a LEFTIST. In an interview given to the Outlook magazine (Millennium special, 1999, interviewed by Krishna Prasad) (see below – click for a bigger image) he notes, that "my own political position is distinctly on the left".

I rest my case. As Hayek said, "There is all the difference in the world between treating people equally and attempting to make them equal."

I DO NOT recommend Sen. By all means let him support foolish social democratic  ideas in the West through his teachings. I trust, though, that the West will avoid its fascination with yet another proponent of social democracy. But for India's sake, let's scrupulously stay away from his ideas! 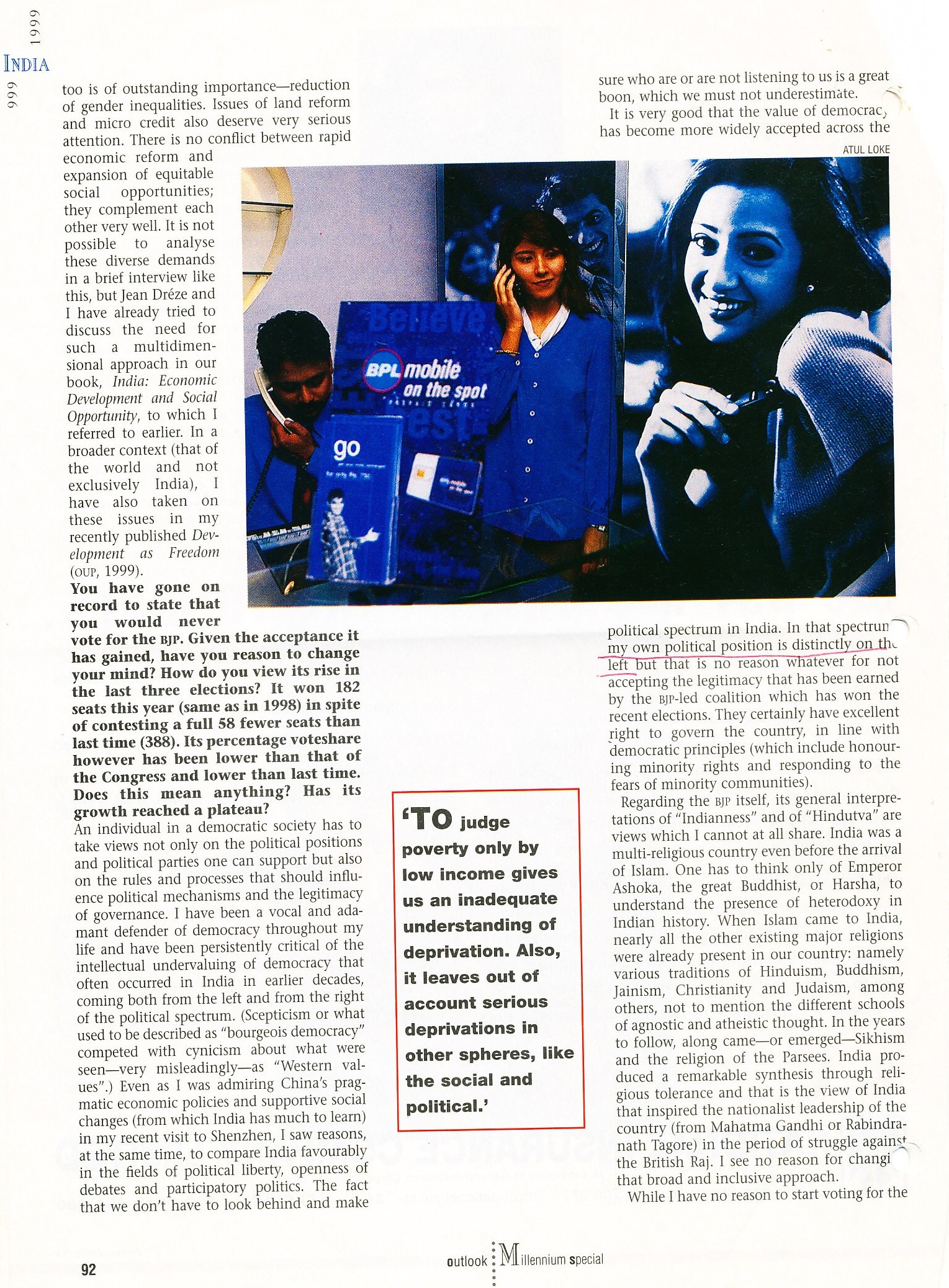 This entry was posted in Bad ideas!, Economics, Philosophy and tagged in Government failure, Social liberalism.

« Draft article for comment: “Kashmir: A perspective from first principles”
The limits of social work in defeating corruption in India »
View more posts from this author

9 thoughts on “Why Amartya Sen is not a classical liberal”