India sold out by CPI, Congress and our press to the USSR

Thanks to Surya for alerting me to the Mitrokhin Archive. I feel like a fool not even having known about this! But better to get this information late than never. (My excuse is that for a number of years I had severe RSI problems and did not use the computer actively to search for news on India).

I've gone through the internet and confirmed that the material is genuine, and as Minister Jack Straw noted in the British Parliament:

"Thousands of leads from Mr. Mitrokhin's material have been followed up world wide. As a result, our intelligence and security agencies, in co-operation with allied Governments, have been able to put a stop to many security threats. Many unsolved investigations have been closed; many earlier suspicions confirmed; and some names and reputations have been cleared. Our intelligence and security agencies have assessed the value of Mr. Mitrokhin's material world wide as immense."

While the KGB destroyed all its actual archives, this material, based on notes made by Mitrokhin while he worked inside the KGB, is as authentic as it gets. More importantly EVERY WORD THAT I'VE READ FROM THE INDIA SECTION (below) SOUNDS TOTALLY AUTHENTIC. It confirms whatever I know of the shadowy world of Indian politics.

On India, the following book (one out of the seven books published by Mitrokhin) is of particular interest: Andrew, Christopher, Vasili Mitrokhin (2005). The Mitrokin Archive II: The KGB and the World. Allen Lane. While the India section in this book is now publicly available (presumably someone has scanned it for public dissemination), the relevant footnotes are missing, so I've ordered the book from Amazon since I need to know the entire details. This is absolutely shocking material. It has caused me even more grief than ever about the machinations of the Congress (I). If I had known about this before I wrote BFN, I'd have made appropriate references to this material.

Note that in the section below I've broken up the paragraphs for easier reading. My Word version, should you be interested, is available here.

This is a story of realpolitics, but also a story of deep corruption and betrayal of the trust of the people of India. This is the kind of stuff that I fully support publication of – as part of whisleblowing activity (unlike routine operational matters that Wikileaks has taken to publishing). The reality is that evil regimes like that of the USSR were hell-bent on destroying the truth, and in corrupting everyone they could. That the USSR ultimately collapsed under the weight of its own falsehoods and delusions should not detract us, however, from the reality that India was literally sold out by our politicians and press to the USSR.

– MANY Indian politicians were funded by USSR/KGB, particularly members of CPI and Congress. Indira Gandhi was perhaps the highest functionary so funded (possibly without her direct knowledge – although that sounds totally implausible), but tens, if not hundreds of Ministers, MPs, bureaucrats (diplomats), intelligence officers and policemen were paid by the USSR. Note how Mrs Gandhi also took money from CIA (although only (!) twice). The worst traitors seem to be the CPI – a party that ought to be investigated by the Election Commission and shut down. Congress (I) also needs to be investigated seriously. (Indira Gandhi does come out well, though, in her not following suggestions to rig the 1977 elections, and in handing over power after losing them).

– TEN Indian newspapers and one news agency were on the payroll of KGB, with thousands of KGB-planted articles published in India. [IS THIS WHY INDIAN NEWSPAPERS HAVE BARELY CARRIED THESE ALLEGATIONS OR CALLED FOR AN INVESTIGATION?]

All these are criminal offences under the FCRA. In my views, these action amount to treason. Most of the politicians/diplomats/intelligence officers cited have now died, but these people should have been publicly hanged.

At least a few Indian diplomats (IFS?) seem to have been implicated as double agents. This is serious stuff. Needs investigation.

I also discovered that Sanjay Gandhi had started opposing socialism. That's useful information! A lead to pursue in the future. An evil man in his own right, with no regard for freedom and democracy, he seems to have not bought into the communist propaganda that his mother and grandfather had bought into.

I am also sure of one thing: that regardless of the end of the USSR, the habits of corruption that were formed by the communists and socialists in India have not died. Many of those fattened on Soviet corruption and habituated to evil manipulation of the media still continue to influence India (if not directly then through their children or grandchildren). India needs to oust the socialists if it has to breathe in peace. These socialist criminals have looted and destroyed India at every step.

Let's work to free India. Join the Freedom Team or support it as a Freedom Partner. 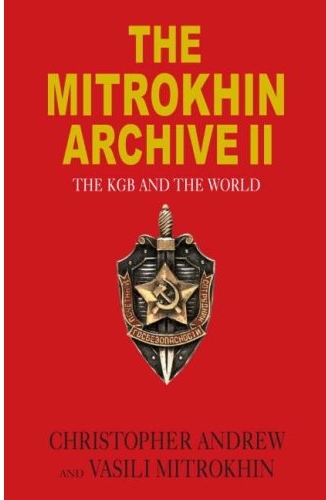 (Source of the image: Amazon)

The Special Relationship with India

Part 1: The Supremacy of the Indian National Congress

The Third World country on which the KGB eventually concentrated most operational effort during the Cold War was India. Under Stalin, however, India had been regarded as an imperialist puppet. The Great Soviet Encyclopedia dismissed Mohandas Mahatma Gandhi, who led India to independence in 1947, as ‘a reactionary….who betrayed the people and helped the imperialists against them; aped the ascetics; pretended in a demagogic way to be a supporter of Indian independence and an enemy of the British; and widely exploited religious prejudice’.
Despite his distaste for Stalinist attacks Jawaharlal Nehru, the first Prime Minister of independent India, ‘had no doubt that the Soviet revolution had advanced human society by a great leap and had lit a bright flame which could not be smothered’. Though later eulogized by Soviet writers as ‘a leader of international magnitude who ranked’ among the best minds of the twentieth century, Nehru was well aware that until Stalin’s death in 1953 he, like Gandhi, was regarded as a reactionary.
During the early years of Indian independence, secret correspondence from Moscow to the Communist Party of India (CP1) was frequently intercepted by the Intelligence Branch (IB) in New Delhi (as it had been when the IB was working for the British Raj). According to the head of the IB, B. N. Mullik, until the early 1950s every instruction that had issued from Moscow had expressed the necessity and importance [for] the Indian Communist Party to overthrow the “reactionary Nehru Government”. Early in 1951 Mullik gave Nehru a copy of the latest exhortations from Moscow to the CPI, which contained a warning that they must not fall into government hands. Nehru laughed out loud and remarked that Moscow apparently did not know how smart our Intelligence was.
Neither Nehru nor the IB, however, realized how thoroughly the Indian embassy in Moscow was being penetrated by the KGB, using its usual varieties of the honey trap. The Indian diplomat PROKHOR (code name given for the Indian by KGB) was recruited, probably in the early 1950s, with the help of a female swallow (a female Russian prostitute/spy), codenamed NEVEROVA, who presumably seduced him. The KGB was clearly pleased with the material which PROKHOR provided, which included on two occasions the embassy code-book and deciphering tables, since in 1954 it increased his monthly payments from 1,000 to 4,000 rupees. Another Indian diplomat, RADAR, was recruited in 1956, also with the assistance of a swallow, who on this occasion claimed (probably falsely) to be pregnant. A third KGB swallow persuaded a cipher clerk in the Indian embassy, ARTUR, to go heavily into debt in order to make it easier to compromise him. He was recruited as an agent in 1957 after being trapped (probably into illegal currency dealing) by a KGB officer posing as a black-marketeer. As a result of these and other penetrations of the embassy, Soviet code breakers were probably able to decrypt substantial numbers of Indian diplomatic communications.
As KGB operations in India expanded during the 1950s and 1960s, the Centre seems to have discovered the extent of the IB’s previous penetration of the CPI. According to a KGB report, an investigation into Promode Das Gupta, who became secretary of the Bengal Communist Party in 1959, concluded that he had been recruited by the IB in 1947. Further significant IB penetrations were discovered in the Kerala and Madras parties. By the 1960s KGB penetration of the Indian intelligence community and other parts of its official bureaucracy had enabled it to turn the tables on the IB. After the KGB became the main conduit for both money and secret communications from Moscow, high-level IB penetration of the CPI (Communist Party of India) became much more difficult. As in other Communist parties, this secret channel was known only to a small inner circle within the leadership. In 1959 the CPI General Secretary, Ajoy Ghosh, agreed with the Delhi residency on plans to fund an import-export business for trade with the Soviet bloc, headed by a senior Party member codenamed DED, whose profits would be creamed off for “party funds”. Within little more than a decade its annual profits had grown to over 3 million rupees. The Soviet news agency Novosti provided further subsidies by routinely paying the CPI publishing House at a rate 50 per cent above its normal charges.
ASIA

The Decline and Fall of Congress

This entry was posted in Bad ideas!, India, Politics and tagged in Corrupt India, Corruption in Indian politics, Corruption in the Indian media, Nehruvian socialism.

25 thoughts on “India sold out by CPI, Congress and our press to the USSR”