The optimal level of the public sector

Like most things in life, the government is good for us only in moderation. To illustrate this, consider the diagram I've made, below (click it for a bigger image). 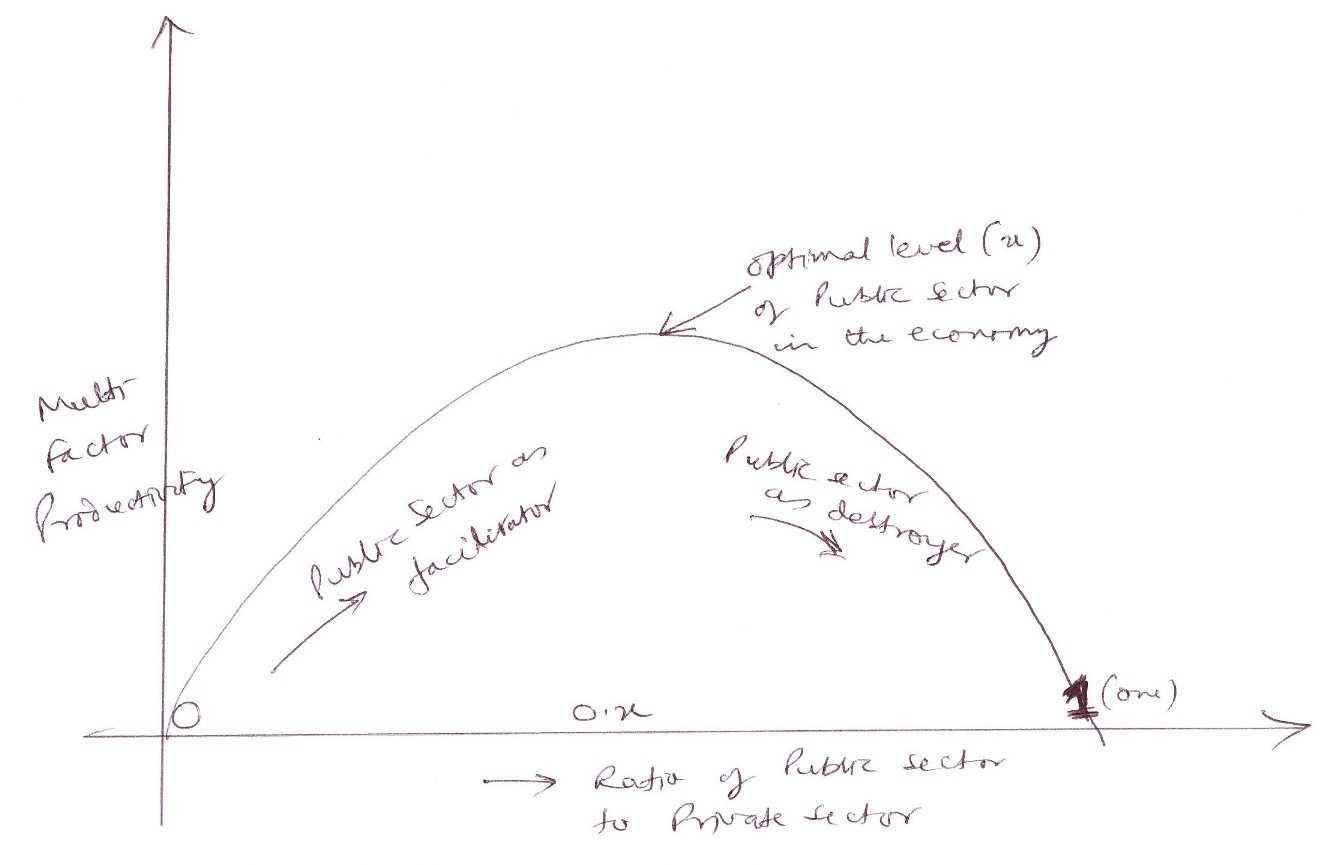 The diagram depicts the likely relationship between productivity in an economy and the size of the public sector (by which I mean the government, or tax-funded sector).

When there is no public sector (i.e. we have anarchy or the state of nature), then I believe (see DOF for a detailed explanation), along with Hobbes and Locke, that our lives are "solitary, poor, nasty, brutish, and short". We have no time or capacity to learn enough about the world so we can innovate, merely aiming to dodge the terrors of anarchy. Our productivity is effectively zero. We are at the origin of the diagram.

Once government comes into being, conditions become more stable and we can start devoting time on our own education and exploration of the world. At this initial stage the government is a facilitator of our self-development. As law and order increases, infrastructure increases, and equal opportunity is ensured through a social insurance regime, we can now start to focus on gaining knowledge. Accordingly, productivity starts increasing. Note that the public sector by itself produces nothing, its is a consumer of resources and is paid to facilitate production by citizens.

Further increases in the public sector lead to the optimality point beyond which the public sector starts to destroy society's productivity. This occurs when the state takes on responsibilities of a businessman or charitable institution (both being the requirements of a social democrat or socialist policy). By government running the railways, buses, or telecom, or operating schools – productivity is destroyed due to government failure. At that point the public sector becomes the enemy of the people.

As a general rule, the MOMENT a government has delivered defence, justice and police, it should stop expanding its activities. Some infrastructure provision might be attempted – but only where the private sector can't be motivated to get involved. Similarly, some frameworks for social insurance and equal opportunity can be attempted, but the social insurance implemented should be frugal and not distort incentives. Attempts to educate children should not require a government to operate schools, for instance.

At the point of optimality I expect (and this is based on a my judgement; no theoretical proof can be provided!) a level of taxation of around 25% of GDP. If a government attempts to consume more of the GDP, it will end up crowding out private investment and destroying productivity – and hence wealth.

The status of Western and Indian governments

The West has – IN ALL CASES today – a public sector that is too large, being well beyond the point of optimality. Through reckless consumption by governments, significant levels of public debt have built up in most nations in the West. And given the many bad (social democratic) policies these nations have followed, virtually no Western nation has any chance of achieving significantly higher levels of productivity in the near future. Stagnation has set in the West, and will weaken the West's sphere of influence in the world significantly.

On the other hand, India has a LOWER level of public sector than it needs, with only around 16-18% of GDP currently consumed as taxes. This is too low, and creates negative externalities such as poor security, justice, and infrastructure, not to speak of poor levels of education. As shown in BFN, India's tax system needs to be reformed significantly to collect taxes from a broader base. Only then, and subject (of course) to the removal of all socialist policies, India's productivity can aim to reach the optimality point, increasing India's wealth significantly.

I recall in this context the famous paper of Alwyn Young (1995) – "The Tyranny of Numbers: Confronting the Statistical Realities of the East Asian Growth Experience". If that paper's conclusions still hold good, then almost ALL of India's current increase in wealth in the past two decades  are likely to have come from increases in the application of the factors of production, not increases in factor productivity. That is not good for India's long term growth. India's government must start functioning. [Btw, if you know of a good study of India's recent productivity performance, please let me know.]

This entry was posted in Bad ideas!, Liberty, Philosophy and tagged in Government failure.

5 thoughts on “The optimal level of the public sector”