Free society as the transition from collectivism to individualism

A diligent understanding of human nature inevitably leads us to a society where the individual must be free subject only to his being accountable for his actions. This is quite different from the statist collectivist society wherein the state controls us and tells us what to do. In the free society no one controls us. Instead, we agree to control ourselves, to take responsibility.

The following extract from my draft manuscript The Discovery of Freedom (DOF for short) clarifies this point and shows how a free society is a transition from antedeluvian dangerous statist models like socialism towards capitalism.

Classical liberalism (or capitalism) … argues that there is little to be gained and much to be lost by idealising humans. It seeks to defend and protect us against aggressive competitiveness It places the individual at the centre, the society at the periphery. It believes that under a well-designed governance arrangement, people will work cooperatively even as they are essentially competitive.

It also does not glorify the superman unlike Friedrich Nietzsche (‘I teach you superman. Man is a something that shall be surpassed’). The liberal never fawns on so-called ‘great men’, knowing very well that everyone is flawed. The liberal has no heroes. There is none, he believes, whom we can rely upon or ‘follow’ uncritically. The theory of individualism or liberalism is therefore a philosophy that defends the everyday man, not ‘great’ men. We want everyone to be great, well-behaved and accountable. It is better to be a nation of shopkeepers than a nation of Nazi lunatics, each claiming priority over others, or a nation of socialists where people are herded like sheep.

Observe what people do, not what they say. I’ve not seen too much intrinsic goodness in people. Instead, I have seen goodness that is strategic, being motivated by the carrot or the stick. Capitalism builds checks and balances to create conditions where people can better trust each other. And while not denying the need for a nation state, it sees the state as a creature of our convenience; not the end for which we exist. The government is our servant, not master. 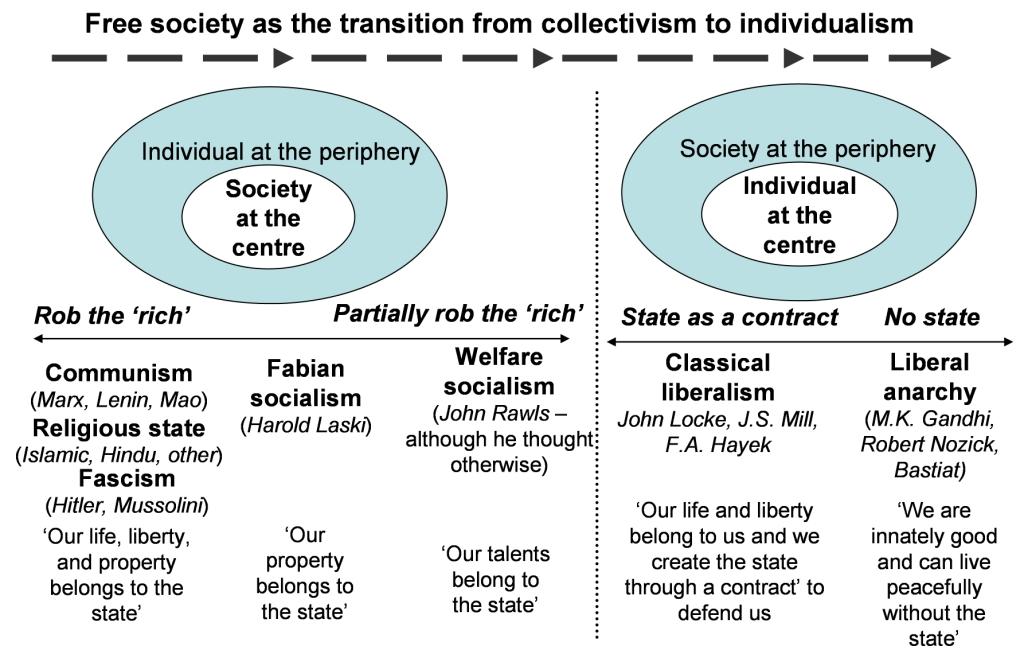 This entry was posted in Bad ideas!, Liberty, Philosophy and tagged in Socialism.