A few weeks ago I wrote about the significant levels of soft racism prevalent in the West, including Australia. I cautioned, however (and continue to do so!) that soft racism does not, as a rule, lead to violent crime (see this post). Hence the hungama made by the Indian press last year was totally unwarranted.

A study reported today (download PDF here) provides detailed evidence about the precise extent and magnitude of soft racism in Australia . According to the study, "Only 19 per cent of Australian-born tertiary educated people aged 35-54 are working in low- or medium-skilled occupations, and only 20 per cent of MESC migrants, compared with 38 per cent of non-MESC migrants." [MESC = main English-speaking countries]. 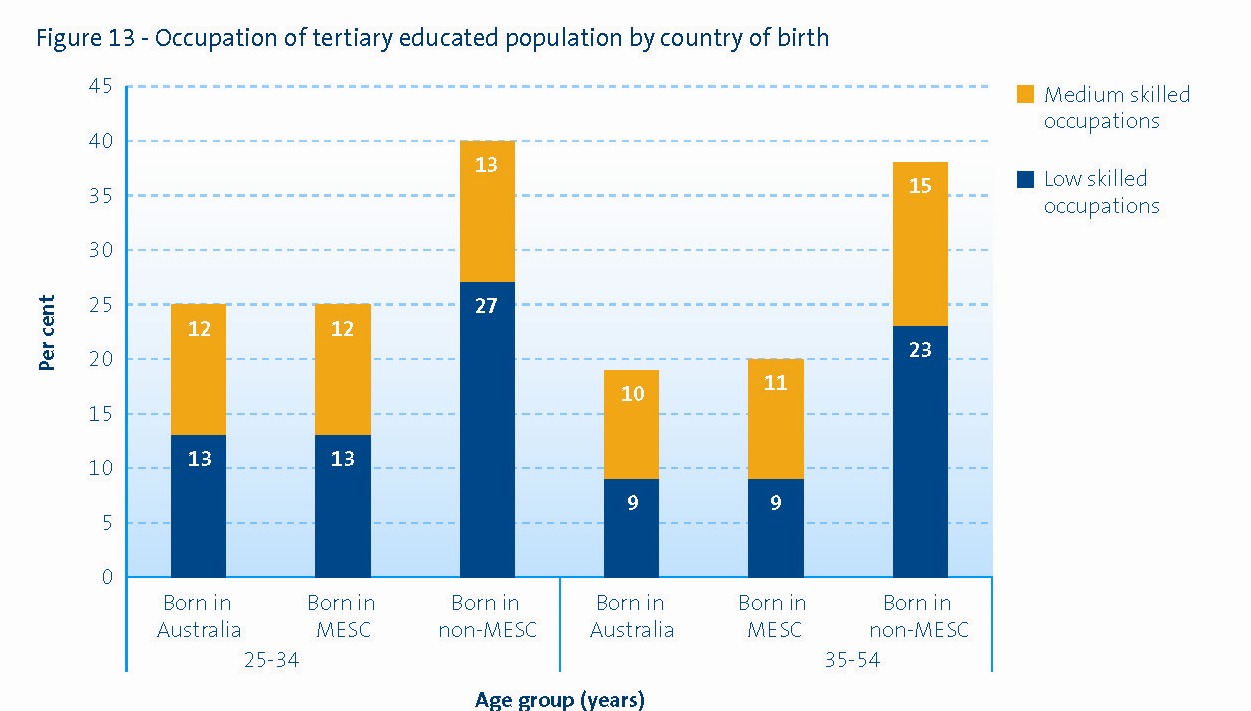 Table: Where tertiary-educated migrants from English and non-English countries end up working (click for larger image)

In brief, 4 out of 10 highly educated Indians who migrate to Australia will NOT find jobs in occupations commensurate with their skills and qualifications, compared with only 2 out of 10 migrants from, say England.

This difference, and hence the extent of racism, is HUGE! True, all of it might not be directly related to racism, but I am certain that a vast portion of this difference is explained by soft racism.

Such soft racism  harms Australian productivity – and destroys the very point about getting skilled migrants tp Australia – but more problematically it loses Australia many friends. Soft racism creates negative perceptions about Australia in the minds of the highly educated (and vocal!) Indians who come to Australia and can't find ANY OTHER reason but racism to explain their lack of career progression.

It would appear to me that many (not all!) Australians would rather see doctorates from India work as taxi drivers and menials than as scientists and policy advisers. A demeaning stereotype about Indians prevails in Australia.

What I wrote in my previous blog post holds good: "A doctorate from a top-ranked (Western) university will be treated as equivalent to a high school diploma from Australia – if that! If you are selected into a job, you can expect to be paid far less than what a 'white' person of comparable skills is paid. And it will not matter that you have excelled in your academic career and outclassed Westerners. It will hardly matter if you have managed massive organisations and large budgets. You will often be valued less than locally qualified graduate with lower degrees and experience. And your career will be frozen at low levels of seniority."

I know of Indian MBAs working in extremely junior positions in occupations that require virtually no skills, and PhDs from Australia (!!) who don't get called even for job interviews in areas they have specialised in. I have been lucky to have found a reasonably good job upon arrival, but every day I sense racism as a barrier to progress. If a glass ceiling applies to women in the West, then a much lower glass ceiling applies to Indians.

It is extremely HUMILIATING for bright Indians to report to lesser educated and poorly experienced local Australians. True, there are some local issues to learn about, but such things are child's play for bright Indians. They simply don't get the opportunity. Merit plays an important role in the private sector and reduces the extent of racism, but racism is rampant in the public sector.

I would have NEVER left India (and a senior executive job I had worked very hard to get!) had it not reached unprecedented levels of corruption and mis-governance. Why did I need to come to a country where I knew it would be very hard to be valued commensurate with my skills or experience?

The sad truth, though, is that many of the brightest Indians have been forced to leave India and face daily humiliation since the conditions in India are far worse. As a result of the misgovernance of India by our politicians, (starting with Nehru) Indians are now homeless both in India and abroad.

I believe that MILLIONS of Indian professionals will return to India – with little (if any) goodwill towards the Western nations that hosted them – once India is better governed.

Unfortunately, India REFUSES to wake up. Virtually no one in India wants to reform the governance of India.

This disease of soft racism in the West cannot be easily eradicated, leave alone precisely pinpointed in particular cases. It is something like the caste system in India – devious and impregnable. Often unconscious.

Note that I do not advocate Western government interventions to "fix" this problem. This problem is NOT the job of a government to fix. This is a social problem and will need different solutions. Education will help, but theonly guaranteed way for this problem to be fixed is for India to become the world's richest country. At that stage Western populations will line up to get visas to migrate to India. Then the tables would have turned and hopefully everyone in the world will finally agree that merit should matter, not the colour of one's skin.

But India can't become rich unless it reforms in a big way. Till then Indians will continue to suffer, both in India and abroad.

I therefore once again invite you to join FTI or otherwise support it if you want to see India rise from its knees during your lifetime.

This entry was posted in Bad ideas!, Current Affairs and tagged in 'Race' and racism, Racism in Australia, Soft Racism.

3 thoughts on “Continuing evidence of soft racism in Australia”