In my draft manuscript, DOF, I discuss the meaning of freedom in some detail (see chapter 2). After discussing what freedom is, I outline what it is not. The following extract, which discusses what freedom is not, shows clearly how ideas like those of Amartya Sen can harm societies.

WHAT FREEDOM IS NOT

Other meanings don’t concern us. For example, the one about the political independence of nations. When people talk about India’s ‘freedom’ movement, or a book is entitled, Freedom at Midnight, people mean national independence, which has little or nothing to do with freedom. Thus, Stalin’s Russia, Mao’s China, and Nehru’s India were independent but their people were not free.
In another, irrelevant form, freedom can also mean ‘an exemption from unpleasant or onerous conditions’. Not only is this wrong, it is often used to mislead. Etymologically such usage is closer to the Latin apathia or Greek apatheia (referring to absence of suffering), and has nothing to do with the root meanings of freedom. Amartya Sen thinks of poverty as unfreedom, believing that ‘economic unfreedom, in the form of extreme poverty, can make a person a helpless prey in the violation of other kinds of freedom.’[1]
But this is nonsense. Freedom never means ‘freedom from poverty’. Slavery is unfreedom; poverty, which is mostly a consequence of unfreedom, is not (see here how unfreedom causes poverty.) By no stretch of imagination can a cause of an event be the same as the event itself! A waterfall is caused by gravity; it is not the same as gravity. Indeed, we can test Amartya Sen’s concept by enslaving him and giving him food and shelter. That might make Sen feel ‘free’ and happy, but no one else will be bought out so easily! 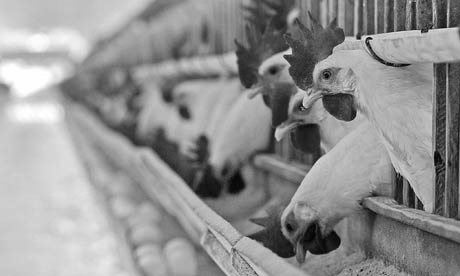 Figure: Food and shelter without freedom denies our humanity.
Unlike some economists like Amartya Sen, we are not farm chicken.
[1] Amartya Sen’s autobiography at the Nobel Prize website.
[http://nobelprize.org/nobel_prizes/economics/laureates/1998/sen-autobio.html]
DIRECTLY RELATED BLOG POST: Why Amartya Sen is not a classical liberal
Please follow and like us:

This entry was posted in Liberty and tagged in Indian economists.