A misunderstood liberal: Thomas B. Macaulay #1

I've been having a debate with an FTI member on Facebook regarding Macaulay. This debate can't be resolved in one blog post so I'll begin with a part of it first.

I'm posting below an image that has been widely circulated within India, and has been used to show Macaulay in particularly bad light. It says:

"I have travelled across the length and breadth of India and I have not seen one person who is a begger, who is a thief. Such wealth I have seen in this country, such high moral values, people of such caliber, that I do not think we would ever counquer this country, unless we break the very backbone of this nation, which is her spiritual and cultural heritage, and therefore, I propose that we replace her old and ancient education system, her culture, for if the Indians think that all that is foreign and English is good and greater than their own, they will loose their self esteem, their native culture and they will become what we want them, a truly dominated nation.” – see image below. 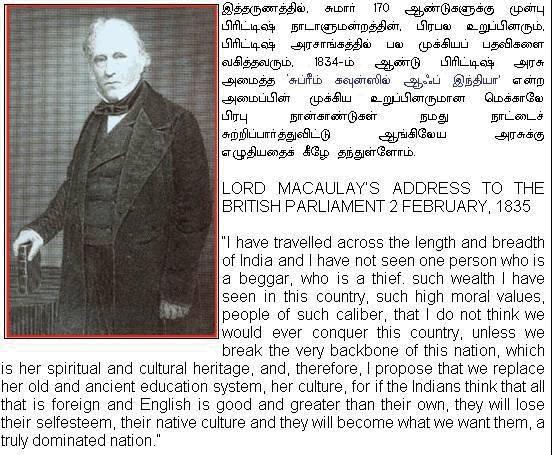 I received this first in December 2006, conducted some research and concluded that this is false. So before I revert to the main debate and assess Macaulay in a wholistic manner, let me first dispose off this image and quote (above). This material is patently false.

Macaulay's 1835 minute is found at: http://www.languageinindia.com/april2003/macaulay.html#minute

I invite anyone to show me this language in the ORIGINAL minute. [Addendum. I just discovered that Shantanu Bhagwat, another FTI member, had done similar research in June 2007 – before FTI was launched – with very similar findings: http://satyameva-jayate.org/2007/06/26/clearing-the-dust-off-macaulays-quote/. Also here: http://desicritics.org/2007/06/26/094952.php. See also: http://answers.google.com/answers/threadview?id=296771. Or this one: http://koenraadelst.bharatvani.org/articles/hinduism/macaulay.html or this: http://alternativeperspective.blogspot.com/2008/02/indian-history-trivia-8-myth-of.html

Also see the bottom of this Wikiquote page – it explains the potential origin of this false quotation.

I trust this closes the needless vilification of Macaulay.]

What does the minute actually say?

My remarks below are derived from a reading of the minute.

Macaulay was perceptive of Indian skills and capabilities and market needs, and argued in favour of what Indians demanded, namely more of English and less of Sanskrit. He did not force English down our throats. Indians were paying serious money to be taught English and that was the reason he felt Indians needed to be taught more English. Those who were taught Sanskrit came to the government begging for jobs – they were entirely useless for any practical purpose, even then.

In 1835 he discussed the Charter of 1813 which laid aside "A sum … apart 'for the revival and promotion of literature, and the encouragement of the learned natives of India, and for the introduction and promotion of a knowledge of the sciences among the inhabitants of the British territories.'" – a subsidy for Sanskirt and Arabic. The 'ghastly' East India company was subsidising Indian languages even in its early days, once the corrupt times of Robert Clive were over.

He argued cogently, and in my view successfully, that "the natives are desirous to be taught English, and are not desirous to be taught Sanscrit or Arabic". He also extolled the capabilities of Indians to pick up English very well: "it is unusual to find, even in the literary circles of the Continent, any foreigner who can express himself in English with so much facility and correctness as we find in many Hindoos." He proved that England needed to increase education in English and stop subsidising Sanskrit and Arabic.

Under no circumstance did he allege anywhere that he wanted to break the backbone of India. That is a very mischievous piece of false propaganda indeed.

Other issue about Macaulay

There is one other issue about Macaulay that I've been invited to address:

Lord Macaulay apparently wrote this in a letter to his father, Oct 12 1836: "Our English schools are flourishing wonderfully. We find itdifficult,–indeed, in some places impossible,–to provide instruction for all who want it. At the single town of Hoogly fourteen hundred boys are learning English…..  The effect of this education on the Hindoos is prodigious. No Hindoo, who has received an English education, ever remains sincerely attached to his religion Some continue to profess it as matter of policy; but many profess themselves pure Deists, and some embrace Christianity It is my firm belief that, if our plans of education are followed up, there will not be a single idolater among the respectable classes in Bengal thirty years hence. Andthis will be effected without any efforts to proselytise; without the smallest interference with religious liberty; merely by thenatural operation of knowledge and reflection. I heartily rejoice in the prospect."

I'll deal with this and indeed, the entire Macaulay contributions, in a separate blog post. The first thing I've got to do is to check the authenticity of this extract. 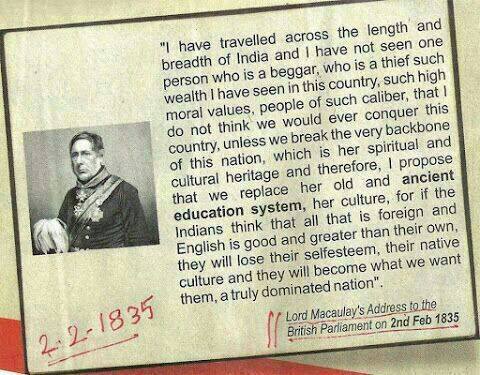 This entry was posted in Liberty, People and tagged in Falsifications and myths, Macaulay.

« England learnt freedom the hard way
Is the world getting more uncertain, or less uncertain? »
View more posts from this author

4 thoughts on “A misunderstood liberal: Thomas B. Macaulay #1”