Since July 2009 FTI members have been speaking in public forums about the changes needed in India and about what FTI is doing to bring about these changes. These outreach events include:

In addition two recent talks have helped spread the message:

While more about these talks (e.g. writeups/ videos) will be published in due course, the slides used by Shantanu and Dipinder are now available, and are presented below. Enjoy!

Shantanu's talk is an excellent representation of FTI views.

Dipinder Sekhon spoke at a TEDx event in Kakinada (AP) on Aug 21 (Ref:http://tedxjntuk.com/). Here are his slides.

India's Second Freedom Struggle: Removing Corruption from Politics
View more presentations from Dipinder Sekhon.
FTI members are India's leaders of tomorrow. Please join me in congratulating these bright young Indians on their brilliant performance!
And if possible, please join FTI!
Here's a photo of a poster for Shantanu's talk (click for larger image) 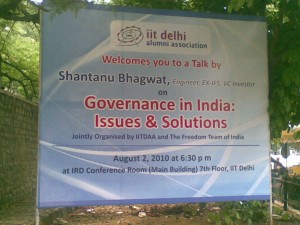 « Australians don’t understand English
What about Pakistan? »
View more posts from this author