I’ll rebut this puerile nonsense separately, but for now, I’ve made a screenshot (for some weird reason, Archive.org is refusing to archive this page).

I do NOT forget criminals. The ABC will be shut down if the political parties that I’m working with get to form government in Australia. This organisation is a turncoat, a traitor to Australia.

END_OF_DOCUMENT_TOKEN_TO_BE_REPLACED

Someone (I’ll make note of the person’s name once I receive permission) has ferretted out the Sutton logic to impose mandatory masks outdoors in Victoria: DOWNLOAD HERE.

I am desperately short of time. I invite anyone who has the time to go through this and provide a technical critique.

Facemasks in the COVID-19 era: A health hypothesis

And probably proof that they make things worse.

This from IMOP’s Telegram group 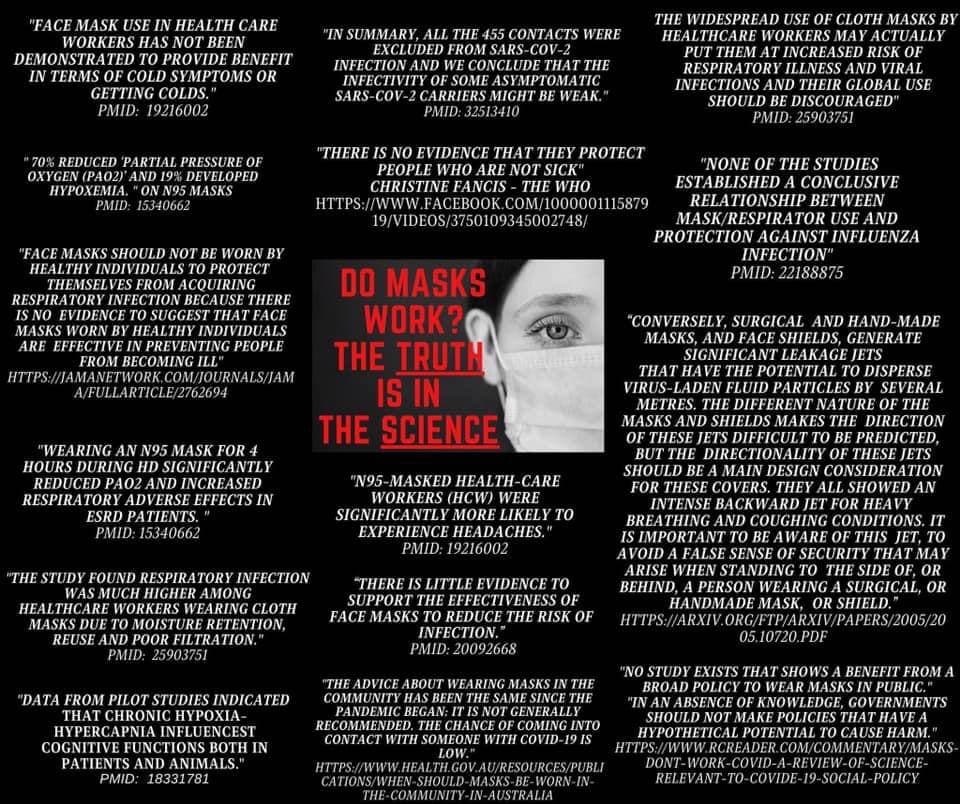 END_OF_DOCUMENT_TOKEN_TO_BE_REPLACED

Mass hysteria continues unabated, and if anyone thinks otherwise, have a look at these

Unless we actively engage with the 80% of the population that is living in a state of panic and fear, expect the worst. Totalitarian control by the state is coming.

Today I lost 3 friends. They went on the attack because I had a different opinion to them, they think it’s ok for people to be discriminated against for not having the vaccine.
Sometimes you have to let go and make peace with that.
💔

I can’t believe how many people are masked to the hilt. Walking alone with a mask in the open desert here in Palm Springs. It’s not only disturbing it’s unhealthy and dangerous. It will be 95 degrees in the next 2 hrs.

END_OF_DOCUMENT_TOKEN_TO_BE_REPLACED

Comments by Elizabeth Hart on the vaccine passport

Tweet
Via email
vaccine passports are one of the major current battlefronts, and what a great interview with Naomi Wolf and Del Bigtree on the Highwire.
FYI, I’ve attached a copy of an article on vaccine passports published in the UK Telegraph today, including some of the comments.
Here are my two comments on the article, I’m in perpetual horror at what is happening in the UK, Boris Johnson and co must be got rid of:

Flabbergasting to see what is happening in the UK…

Boris Johnson and his cronies are ruining your countries and stealing your freedom.

This is treason against the people. The Johnson government is illegitimate in my view. They aren’t serving the people, they are dictators, terrifying the people with propaganda, and failing to be accountable to the people for drastic actions which are destroying freedom of movement and association.

The Johnson government should be taken out and put on trial for what they have done.

People need to wake up and take it back before it’s too late.

As for ‘Covid’, most people aren’t currently at risk of SARS-CoV-2, although who knows what can happen with that mess of fast-tracked experimental vaccine products sloshing around in the community.

The UK is one of the biggest groups of guinea pigs in the world.

Do the people taking these vaccine products realise they’re participating in an experiment, did they give informed consent for this?

Do they realise the ‘regulator’, the MHRA, is conflicted, it’s funded by fees from industry?

Do the people realise the government has given the vaccine manufacturers freedom from liability? Were they informed about this before being jabbed with the experimental vaccines?

The UK is at the heart of the disproportionate and ill-targeted global response to SARS-CoV-2. Do you realise what you have set in train there, and the devastating impact it’s having on the entire world?!?!

And the Bill & Melinda Gates Foundation is right in the thick of it with all the academics on its gravy train, e.g. Neil Ferguson et al at Imperial College London and Report 9, what a disaster…

Gosh, people need to wake up!

The past year has been dominated by this ‘Covid’ thing, transforming life as we know it, throwing us under the technocracy bus.

This opens up all sorts of issues, particularly how the internet is being used to control us, with power centralised with a few oligarchs.

Our banking, communication, media…etc…all controlled by the internet. And now looming vaccine passports on smart phones, and who knows what next…?

We have trustingly given over so much of our lives to ‘the internet’…but who is protecting our best interests? Certainly not ‘our governments’ which have turned on us…they’re the enemy now, they’re not working for us.

Who owns the internet…should this not be for the benefit of all people, and not to be controlled by self-serving oligarchs?

Does Tim Berners-Lee support what is now happening with the web?

The internet has changed the world…but has it all been for the better?

Time for a revision of the big picture, I’m feeling a Luddite revolution coming on…

The UK is the place to watch, it’s had such a massive impact on the global response to SARS-CoV-2 via Neil Ferguson et al’s Report 9 particularly.
Re the UK this has probably been shared before, possibly on CHD too, but this very interesting article by Whitney Webb is worth revisiting periodically: Developer of Oxford-AstraZeneca Vaccine Tied to UK Eugenics Movement.
NAOMI’S VIDEO ON TELEGRAM
https://t.me/sanjeevsabhlok/753
END_OF_DOCUMENT_TOKEN_TO_BE_REPLACED